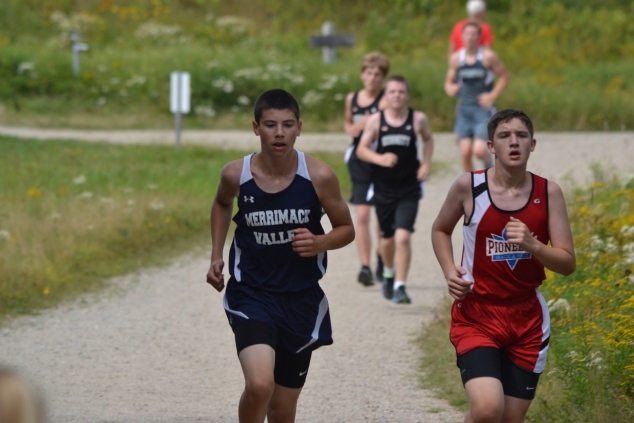 The Merrimack Valley High School cross country team this year is young. The girls have only one senior, while the boys have two. The team may be young, but it is also talented.

The team refers to itself as one big family. The family aspect of the team can be seen in how much time they spend together. One-hundred-mile relay races over the summer, a four-day camping trip in the White Mountains, and pasta dinners before every weekend race are just a few of the things the team enjoys together.

The boys team placed a disappointing 21st in the Division Meet last year, but recently won a five-team meet at John Stark. Senior Walker John of Boscawen won that race and leads the team.

This is something of a come-back year for Walker, as he missed last cross country season and track season with two stress fractures. He is highly motivated to succeed during his senior year and is a great leader for the younger athletes.

Running in second, third, or fourth on the team are two newcomers to the team, freshmen David and Matt Reynolds of Andover. It’s not often that ninth-graders come in and immediately have an impact on the team, but the Reynolds brothers are veteran runners already, having run for Andover Middle School. David is currently one of the top freshmen in Division II.

MV’s first cross country meet was at Great Glen Trails in Gorham on August 29. Freshman Zack Cronin of Andover ran on the JV team after taking up cross country just a week earlier. Despite being new to the sport, Zack was MV’s top junior varsity runner, finishing 50th overall in the JV race!

The important meets leading up the the Division II Championships on Saturday, October 31 started in late September with the Bobcat Invitational. The season peaks in early October with the Woods Run in Thetford, Vermont and the Concord Area Championships hosted at Merrimack Valley on Thursday, October 22.

To follow the team’s season as it unfolds you can checkout the team’s Web site at MVxcPride.com.