February 8, 2013 • Saved under Just For Fun
By Jay Fitzpatrick 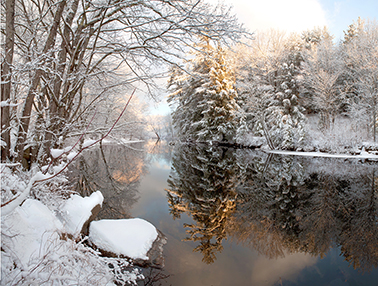 Since the last snow storm, I had been thinking about photographing the reflections of snow-covered evergreens in a slow-moving river. On January 16 we got about six inches of new snow and when I woke up the following morning, I could see the sun was coming out. Morning sun, a new blanket of snow, all I needed was a slow-moving river.

So I headed over to the Blackwater River and took a couple of shots behind the Green Crow lumber yard. Then I went east toward town and to my right I could see the river and a possible opening in the trees. The sun was just beginning to illuminate the tops of the trees along the riverbank. I parked at the pull-off area and walked back east about 50 yards or so, looking for an opening with a safe place to stand near the water without falling in. I made it down the rip-rap using my tripod to stabilize myself. What a sight!

I had driven by this site hundreds of times in the last 25 years but this was the first time I had seen this section up close. The reflection of the sky was a deeper blue than the sky itself. I tried to figure the best way to compose the scene and shot horizontally then vertically. This image is actually a vertical panorama, consisting of four separate shots from left to right and overlapping, all stitched together in Photoshop. A winter wonderland, to be sure. Beauty surrounds us, if we take the time to seek it out. Photo and caption: Jay Fitzpatrick