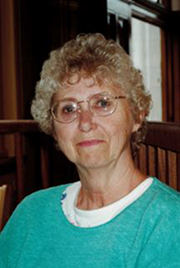 The daughter of Frank R. Cutler and Alma Smith Cutler, Judy was educated at Wilmot Elementary School.  She attended Andover High School, the University of New Hampshire, and graduated from Colby Junior College in 1957.  After college, Judy briefly worked at Kearsarge Telephone Company, and in December of 1957 she married Army Private, Gerald (Jim) Rayno.

Judy then accompanied her husband to Fairbanks, Alaska where their first daughter was born.  Following Jim’s military career and the birth of two more daughters, the family settled in Wilmot, New Hampshire.

Judy most loved to travel.  She traveled extensively throughout Europe, Britain, and North America, and particularly enjoyed traveling through Ireland.

Judy was a talented crafter who excelled at sewing, knitting, and especially quilting.  Her beautiful quilts were often used as exhibitions and fundraisers for many causes she held dear, such as her church, and the Wilmot Cemetery Committee, where she served for many years.
Judy is predeceased by her parents and her Brother, Alan Cutler.

Friends called at the Chadwick Funeral Home, 235 Main Street, New London on Friday, April 5, 2019 from 6 to 8 PM.  A Celebration Mass was held the following day, Saturday, April 6, 2019 at 11 AM at Immaculate Conception Church in Potter Place, New Hampshire followed by a gathering of friends and family at the Red Barn in Wilmot behind the Post Office.  Burial will be later in the spring.