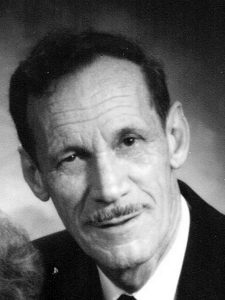 Chester Albert Barker was born June 14, 1928, and died on February 28, 2019, in Hudson, N.H. Mr. Barker was born in Hill, N.H., and grew up in nearby Danbury, with his parents, four brothers and a sister. His childhood consisted of hunting, fishing, and subsistence farming in small town rural New Hampshire. He was quite unaware that his family was poor. Mr. Barker was drafted into the United States Army during the Korean Conflict and served honorably in the European theater. He returned home on leave to marry his childhood sweetheart, Althea Currier of Wilmot, N.H., in 1951. They celebrated their 64th wedding anniversary in 2015 shortly before Althea’s death. Chester had nursed his wife’s chronic medical condition for over 20 years. He never complained. Not once. She was his wife, lover, confidant, and very best friend. He never recovered from the loss.

Chet was an engineer by trade. He attended Wentworth Institute in Boston and the University of New Hampshire though he was largely self-educated. Personable and energetic, he was well-liked by his co-workers throughout a long and successful career with Sanders Associates and Raytheon Company.

A hunter, fisherman, and woodsman, Mr. Barker loved the outdoors he had grown up in. Rugged hills and ledges, brooks, ponds, and swamps were the places he liked the best. Chester’s sense of humor was his signature, especially in his later years. He took his work, family, and responsibilities very seriously but refused to take himself seriously. The result was a relaxed, childlike manner that put everyone he met at ease. It is hard for those who knew him to keep from smiling when they think of him. He had a long and happy life in which he was well loved. He leaves behind an appreciative family that he loved well. Chester looked forward to being reunited with his loving wife, Althea. He is now at rest.

A Celebration of his Life will be held on May 4, 2019, at Bennett Funeral Home, 209 North Main Street, Concord, N.H. Visitation will be held from 10 to 11 AM. Memorial service will follow at 11 AM. There will be a procession to Blossom Hill Cemetery for a committal service with military honors. In lieu of flowers, donations may be made to The Multiple Sclerosis Society.

Arrangements are entrusted to the Bennett Funeral Home of Concord. Fond memories and expressions of sympathy may be shared at www.BennettFuneral.com for the Barker Family.
Published in The Concord Monitor on Apr. 10, 2019