May 3, 2019 • Saved under Uncategorized
Press release 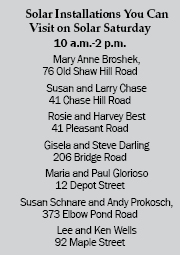 Do you have an interest-even a remote one-in generating electricity on your own property via a solar-electric (or photovoltaic) system, and thereby lowering your carbon footprint, saving energy, and saving money?

If the answer is yes-or even maybe-then plan to drop in at the May 4 “Solar Saturday” event in Andover, being offered by the Andover Energy Group, between 10 AM and 2 PM, in the meeting room in the Town Office Building at 31 School Street. During that time, you’ll be able to:

The Solarize Kearsarge project is part of a larger initiative led by Vital Communities, a Vermont-based nonprofit, to help homeowners across the Upper Valley go solar. In 2014 and 2015, 370 homes were solarized in 25 Upper Valley towns thanks to various Solarize campaigns, a model that has since been successfully copied by communities across Maine and New Hampshire.  One of those projects focused on Andover, New London and Wilmot.

Partly as a result of these efforts, Andover now has more than 60 separate solar-electric installations.

The Solarize campaign follows on the heels of the Weatherize Kearsarge project, also coordinated by Vital Communities.  That project offered residents of the same six towns an opportunity to have their homes weather-sealed and insulated by experienced area contractors at reduced costs, often with financial assistance.  The opportunity to participate in that project ended in late March.

The Andover Energy Group, composed of several local residents interested in alternative energy and energy efficiency, has guided all these activities at the local level.  It has also played a prominent role in improving the comfort and energy efficiency of the Town Office Building via a year-long project that included weatherization, a solar-electric system, and the installation of air-source heat pumps to replace an oil heating system.