May 18, 2019 • Saved under Deaths
By Chadwick Funeral Service 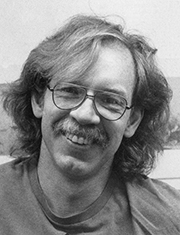 Samuel Kyle Wild, known as the potter in Potter Place for much of his life, died on April 30 after living with an aggressive form of cancer for nearly three years.

He was born and raised in Sandusky, Ohio, and enlisted in the Navy when he was seventeen.  After three years, he decided against pursuing a military career. Instead, he graduated with a Masters in Fine Arts from Ohio University in Athens, Ohio.  It was there that he was first introduced to ceramics and discovered a passion for playing and working with clay. In addition to his studies at OU, he attended a summer session in ceramics at Alfred University in Alfred, New York.

Upon graduation, Sam learned about the League of New Hampshire Craftsmen and the support and opportunities it offered young craftsmen.  He moved to New Hampshire and was juried into the League in 1971. He had a booth at the annual League of New Hampshire Craftsmen’s Fair until 2016.  His work became widely known in the late 1970s when Peter Christian’s Taverns began to use his dinnerware. (The Taverns eventually had to stop using it because so much of it was being stolen.)

The style of Sam’s pottery continued to evolve all his life.  Becoming increasingly playful, it featured three-dimensional frogs, lizards, turtles and imaginary creatures.  People often told him that his pots made them smile. He continued to do the Fair until the deterioration in his health prevented it.

Sam will be fondly remembered by family and friends as a mensch, a gentle soul, and a gifted potter.  He liked to bake bread and eat it, and he loved dessert. Strawberry season required whole meals of strawberry shortcake; peach season demanded entire meals of pie and cobbler, and carrot cake was always in season.

He had an original, sly sense of humor.  He always tried to do the next right thing.  He quoted his dad often, “If you can’t use your head, you have to use your feet.”

For those who would like to make a donation in his memory, please consider an organization that promotes justice for all.  Donations may also be made to the hospice program at the Lake Sunapee Region Visiting Nurse Association.

A gathering to celebrate Sam’s life will be held in the fall.