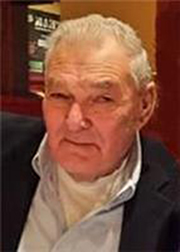 He was born on July 18, 1937, in Ridgeway Township, the son of Clifford and Margaret Brown. On January. 19, 1957, he married Barbara Fisk of Manchester, and they celebrated their 62nd Wedding Anniversary in January.

Jim was a lifelong resident of the Clinton area. He spent his life working as a farmer and, along with his son, spent 50 years establishing Brown’s Trailers. He was a member of the Oliver Gang and collected and restored antique tractors as well as Oliver memorabilia. He had a love of all animals, especially cows and border collies.

In addition to his wife, Barbara, he is survived by his three children, Sue (Mike) Vershum of Manchester, Diane (Dave) Benson of Andover, and Bradley (Carol) Brown of Saline. His six grandchildren are Valerie (Greg) Davis of Grass Lake, Stephanie Vershum of Manchester, James (Tarah) Vershum of Yukon, Okla., Carmen (Jeremy) Palmquist of Raymond, Jon (Meredith) Benson of Beverly, Mass., and Joshua Brown of Saline. He has nine great-grandchildren. He is survived by his stepfather, Leroy Brugger of Tecumseh, and his two brothers, Larry (Rebecca) Brown of Richmond, Va., and Richard (Mary Ann) Brown of Clinton. He has two sister-in-laws, Margery Fisk Hucke of Fischers, Ind., and Arlene Fisk of Manchester, as well as many nieces and nephews.

He was preceded in death by his parents, Clifford and Margaret, and his brothers-in-law, Helmet Hucke and Clinton Fisk.

A memorial service for Jim will be at 11 AM. Saturday, June 22, at the Clinton Chapel of Handler Funeral Home with Michael Hoppe and Gus Kuether officiating. There will be a luncheon following the service until 4 PM. at the family farm. Inurnment was in Riverside Cemetery.

In lieu of flowers, memorial contributions in memory of Jim can be made to a Humane Society or a charity of choice. Condolences may be offered to the family at www.handlerfuneralhomes.com