Galileo Galilei “The Starry Messenger” Draws A Crowd In Andover 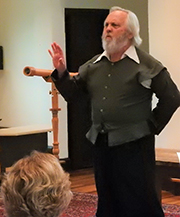 Galileo Galilei, or rather actor Michael Francis playing the part of the famous 17th century scientist, captivated and entertained the audience during his presentation of “Galileo Galilei, The Starry Messenger” in Andover in June.

Remaining in character throughout the presentation, and dressed in 17th century clothing to match, Mr. Francis transported everyone back in time with his explanations of how he improved the telescope, discovered the moons of Jupiter, worked with pendulums, and proved the theory that the earth and the planets revolve around the sun rather than the other way around. 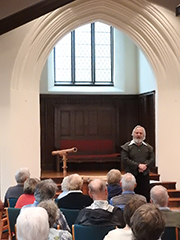 “Galileo” didn’t just tell the story, he had the audience participate by including selected individuals in experiments and demonstrations to show how he proved his theories.  Later, he invited questions about his work, his life, and his times. When someone asked about Einstein (who wasn’t born until after Galileo’s time), he remained in character and simply responded “who? I don’t know this Einstein.”

Between Mr. Francis’ affected Italian accent, his stories of events during his time, and the atmosphere of Proctor Academy’s Old Stone Chapel where the event was held, one could almost believe it was the 17th century.  The audience was brought back to the 21st century towards the end of the presentation though, when “Galileo” shed his charade and became Michael Francis once again to answer more questions about Galileo and about himself.

This presentation was arranged by the Andover Historical Society (AHS), and made possible by a grant from New Hampshire Humanities.  According to Pam Cooper, AHS Treasurer, they put on two such events per year (in addition to the upcoming Old Time Fair). For more information about AHS, visit their website at www.andoverhistory.org.  To discover more details about Michael Francis, visit his website at www.mike-francis.com.