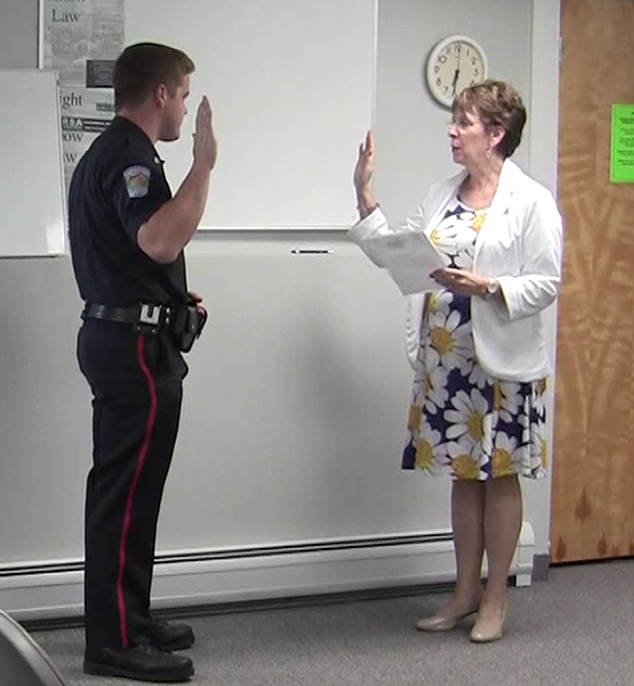 When Jacob (Jake) Hubbard saw the notice that the Andover Police were hiring he decided to apply, even though he knew he was not yet fully qualified.  He met with Chief Mahoney, and when he received the call that he was hired as a trainee he was very excited. He knew this was an opportunity to serve the community he had grown up in and loved all his life. 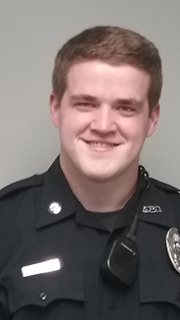 As a youth attending the Andover Elementary/Middle School, Jake thought a lot about being an officer.  He did ride-alongs with Heidi Murphy of New Hampshire Fish & Game, and participated in mock emergency scenarios orchestrated by his mother, an Emergency Management Consultant (his father is a 3rd Grade teacher at AEMS).  His path would take a roundabout route to that first career choice however. From AEMS Jake went on to Proctor Academy, and from there to the University of New Hampshire where he studied Environmental Engineering. He soon discovered that this wasn’t his career path and, after one year, left to work for an uncle in the funeral business.  That was two years ago. Then he started really thinking about his future. This started him looking at police applications, which is how he ended up back in Andover being sworn-in as an Andover police officer trainee.

Officer Hubbard says he has lived in Andover pretty much all his life, and is “very excited” about this new opportunity to get to know more people in town, and to catch up with people he knew.  Along with this new chapter in his life, Jake and his wife, of almost one year, are expecting their first child at the end of July. Bethany is from England, which is where she will have her child.  Jake will be flying over to be with her, taking a break before starting training, or “boot camp”, at the Police Academy in Concord on September 3.

When asked if he saw Andover differently now, than he did as a child, Jake answered that while he doesn’t feel much has changed in this small town, he “sees the town from a different perspective.”  He feels it is an advantage that he knows people, but realizes there may be times when there are challenging interractions. In the end, “people have to follow the law.” He has already taken a four-hour course on the Use-of-Force Continuum, required before being sworn-in, that stresses the use of non forceful intervention whenever possible.  Officer Hubbard knows that learning is one thing, and first-hand experience is another to becoming an effective police officer.

About working with Chief Mahoney, Officer Jake Hubbard commented that “it is great working with the Chief.  He has exceeded all expectations of what he thought a Chief would be like. He’s a mentor.” Additionally, “Officers Dan Shaw and Dan Mori have been great to work with and learn from.”  So, in summary, Jake made the observation that Andover is the “same old town that I love,” and that he is “really excited about the opportunity to be working with the town and the people that are here.”

Good luck to Officer Jake Hubbard in his new career, and congratulations to both he and his wife Bethany on the arrival of their child.