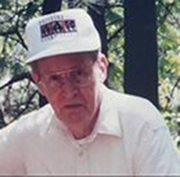 Burlington, VT – Robert (Bob) Willard McClellan, retired journalist of 41 years in Springfield, died peacefully surrounded by family, September 9, 2019, at UVM Medical Center in Burlington, Vermont. He was 94. Bob worked his entire newspaper career at the Springfield Newspapers. He started at the Springfield Daily News in 1955 as a beat reporter, and retired in 1996 at age 72 as the editorial page editor for the Union-News. A stickler for good grammar and clean writing, he liked to say, “There are only two ways to spell a word, right or wrong. If you don’t know, look it up.”

He was active in the Valley Press Club during his career and in his retirement, serving as the Valley Press Club (VPC) president from 1976-78 and receiving the lifetime achievement award from VPC in 2006. He also was a longtime board member and chair of the VPC scholarship committee, making connections with aspiring young journalists, which brought him much joy. In recognition of his dedicated service, VPC awarded a scholarship in his name in June, 2019. Reflecting on his newspaper career, he was most proud of the series of editorials he wrote to advocate for the combining of Classical and Technical High Schools into Springfield Central HS in the 1980s. The decision to consolidate was controversial given the fiercely loyal alumni for both schools, concerns about moving the new high school out of downtown and the costs involved in the move.

Springfield Central High School opened at Blunt Park on September 3, 1986, perhaps in some small part due to his persistent efforts to present the facts and benefits of the merger clearly and objectively on the editorial page. Bob’s literary accomplishments also included co-authoring a book titled “It wasn’t in the contract” with close friend Alex Caron about their days teaching at Proctor Academy, a boarding school in Andover. Bob taught English there for two years before starting his journalism career.

A resident of Springfield from 1955 to 2011, Bob was a transplant from New York City – “the best city in the world” as he liked to say. He was born November 1,1924, to Willard and Elizabeth McClellan on Manhattan’s Upper West Side. He and his parents and his older sister, Jean, lived in a modest apartment on 137th Street, walking or taking the subway as their mode of transportation, and attending nearby North Presbyterian Church every Sunday.

Bob’s New York City roots remained strong his entire life. His favorite songs included Sinatra’s “New York, New York,” and he was a dedicated New York sports fan, born out of trips to the ballpark as a kid to watch Yankee greats Joe Dimaggio and Lou Gehrig. He also developed a love of horse racing through family visits to Saratoga, New York, home to Saratoga Race Track. This led him, as an adult, to make an annual trip to the Belmont Stakes horse race with a group of Springfield Newspaper colleagues, including his most memorable trip in 1973 to see Secretariat win the Triple Crown.

At age 18, he enlisted in the U.S. Army in World War II, becoming a high-speed radio operator specializing in morse code – 30 words a minute. He was stationed in New Guinea from 1943 to the end of the war in 1945. The GI Bill paid for his education at Columbia University, where he earned both his BA and Master’s degrees in English. It was a chance meeting in 1952 that led to his move to Springfield. While enrolled at Columbia, he went on a blind date on a rainy afternoon and met the love of his life – Michelina (Micki) Capuano, also attending Columbia. They were married on June 26, 1954, in Micki’s home town of Springfield, and went on to raise four children and enjoy 62 years of marriage.

Micki had immigrated to America from Italy at age four and was raised in East Springfield. She was part of a large Italian family that welcomed Bob into the fold. The warm and boisterous Italian culture suited Bob just fine. He was social by nature and quickly won over his Italian in-laws, who saw him as the perfect complement for their oldest child. Bob was smitten with Micki from the beginning, and fiercely proud of Micki’s intellect and her accomplishments; she taught college nursing at Bay State Medical Center and was as strong and capable as she was beautiful.

Family came first for both Bob and Micki. They were dedicated to their children and made many sacrifices to ensure all four kids got a good education and had every opportunity to succeed in life. Bob was all-in as a parent. There were basketball games in the front driveway, wiffle ball tournaments in the backyard, trips to Cape Cod and Misquamicut, and lots of chauffeuring kids to sporting events. When grandchildren arrived on the scene, Bob was a doting and dedicated grandfather, always willing to attend dance performances, sporting events, birthday parties and graduations – taking great pride in each grandchild’s unique talents and interests. In addition to family, another cornerstone of Bob’s life was the church. It was part of who he was. In Springfield, he was active in Christ Presbyterian Church, volunteering in many roles and bonding with every minister at the church – Neil Herndon, Carl Mazza, Rick Porter and current pastor Tracy Johnson.

In Vermont, he developed a connection with Pastor Dave Roy of Trinity Baptist Church. In November 2011, Bob and Micki moved to Shelburne, Vermont, after Micki suffered a health setback. Bob was a devoted husband and cared for her in the final years of her life in Vermont. She passed away in 2016. Bob outlived her by three years, continuing to make friends wherever he went, and finding joy in his love of music and dance.

Bob leaves behind two daughters, Elizabeth Parisot (Thomas) of Watertown, Connecticut, and Maria McClellan (James Brumsted) of Shelburne, Vermont; one son, Andrew McClellan (Alice Brown) of Shelburne, Vermont; and his daughter-in-law Kathleen McClellan, of Windsor, Connecticut. He also leaves behind his grandchildren Kate, Ryan, and Erin McClellan; Lindsay, Robert, and Courtney Parisot; Tim, Sam, and Calvin McClellan; and Mia and Max Brumsted, all of whom brought great joy to him; as well as two great grandchildren, Eleanor McClellan and Evelyn Pemberton. He is predeceased by his son Bruce and his sister Jean Reidy.