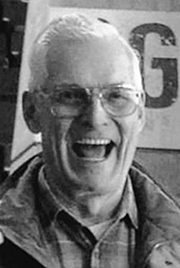 SCARBOROUGH – Robert “Bob” Flint Sr., 80, was surrounded by his family when he passed away at Maine Medical Center on Sept. 14, 2019, due to injuries sustained from a fall with complications from dementia.

Bob was born January 16, 1939 in Lynn, Massachusetts, son of Lawrence and Elizabeth Flint. Elizabeth died when Bob was a young child. His father married Alice Kerwin Flint who raised him as her own. During the summer months, he could be found at The Farm in Weare, New Hampshire. He attended Proctor Academy in Andover, New Hampshire., where he excelled in hockey. He served four years in the United States Air Force stationed in Myrtle Beach, South Carolina, and married Linda Procurot and started a family. They moved to Scarborough, Maine, where he began working for Friden Company. Later he went into sales for Carter-Rice Paper Company and in his later years he was employed by Med-Tech I.V. He was actively involved with his children’s sports teams and was a passionate Little League coach. He enjoyed camping and snowmobiling. He loved spending time with family at the Stanford camp on Sebago Lake. Bob was an avid golfer who looked forward to annual trips to Rangely with his sons. He also loved to fish and was often seen casting with his son-in-law, Jim, at Thomas Pond.

In 1980, Bob married Janice Boynton Flint and the two of them were inseparable during their 40 years together, Bob was a proud member of the Freemasons and along with Janice, was a choir member and active member of the Tory Hill Meeting House community in Buxton.

Bob is survived by his wife of 40 years, Janice Flint; two sons, Robert Flint Jr. and his wife, Phyllis Flint, Ronald Flint, three daughters, Laurie Deluca, Sherry Berryman and her husband, James Berryman, Lisa Nassif and her husband, Keith Nassif. Bob will be missed by his eight grandchildren and three great-grandchildren, who loved him immensely.

Relatives and friends are invited to visiting hours Friday, Sept. 20, from 4-6 PM, at the Jones, Rich & Barnes Funeral Home, 199 Woodford St., Portland. A memorial service and burial will be held at the Buxton Congregational Church (Tory Hill Meeting House) on Saturday, Sept. 21, at 10 AM. Please visit jonesrichbarnes for further information and to sign Bob’s online guestbook.

In lieu of flowers, donations may be made in Bob’s memory to The Animal Refuge League of Greater Portland, P.O. Box 336, Westbrook, ME 04098, or visit ARLGP.org.