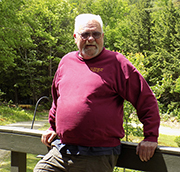 Leslie Martin Ford, Jr., “Skip,” 73, died on October 8, 2019 at the Veterans Administration in White River Junction, Vermont, after a long battle with pulmonary fibrosis. He was born on January 7, 1946 in Quincy, Massachusetts, the eldest son and second born to Leslie Martin Ford, Sr. and Dorothy Oakley Schrader Ford.

He attended Andover High School and at the age of 17 enlisted in the Navy, where he obtained his GED. He served in the Navy for the next eight years, with a tour of duty in Cuba on Guantanamo Bay. He was honorably discharged with the rank of ABH second class.

In 1969, while stationed at the Brunswick Navy Air Base, he met and married his wife, Linda Elliott. They settled in Phippsburg, Maine, Linda’s home town, and were married for 36 years, raising their daughter Liz.

Les worked on a small, family-owned fishing boat out of Phippsburg. He owned his own 18-wheeler, driving coast-to-coast and locally for years. After Linda passed, he moved to the Carabassett Valley and worked at Sugarloaf Ski Resort as a mechanic and fabricator. After retiring in 2006, he moved to Potter Place to live on the family land with his sister, Buffy Thurston.

Les loved being a mentor and a teacher. He spent his life teaching mechanics and welding and was certainly a “jack of all trades.” He restored many vehicles in his shop at his home in Phippsburg, with many a young man learning the trades at his side.

When he moved to Potter Place, he enjoyed fixing tractors, cutting down trees, mowing fields, plowing snow, and most of all driving his red jeep “Squid” to visit his friends.

Leslie is survived by his daughter, Lisabeth, and her husband Bert; their children: Leslie, Albert Jr., and Kayla, Eric, Nikki, and Nathan, and his great-grandchildren Salvador, Georgia, Alex, and Caleb; his sisters Linda and Lizabeth “Buffy”; his brothers Lawrence “Larry,” Lance, and Loring “Spunk”, and the extended and numerous Ford family.

There was a private family service held at the New Hampshire State Veterans Cemetery in Boscawen on October 25. The Cremation Society of New Hampshire assisted the family with arrangements. To view an online memorial, leave a message of condolence, or for more information, please visit CSNH.com.