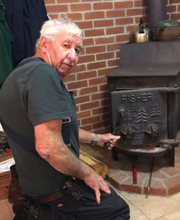 Lee Victor Ford, 76, of Roy Ford Road in South Danbury, died on December 3, 2019 at the New London Hospital.  He was very proud of being a native and lifelong resident of South Danbury. He was born on May 24, 1943, the son of Roy B. and Dorothy E. (Stevens) Ford.

Lee graduated from Andover High School in 1961 and was Salutatorian.  All of his jobs were not further than four miles from home. He was in the dirt moving business, working for Clarence Ford and Don Ford.  Later he was employed by the Town of Wilmot Highway Department and worked his way up to Road Agent, retiring in 2009.

Lee was predeceased by his parents and by a brother, John.  He is survived by his partner of 23 years, Tammie “TJ” Phelps of South Danbury; a brother and his wife, Robert and Audrey Ford of Danbury; two sisters and husbands, Virginia and Lloyd Bennett of Lebanon and Margaret and Michael Barnett of Danbury; and nieces, nephews, and cousins.

A graveside service will be held on Saturday, December 14 at 1 PM in Riverdale Cemetery, Danbury, with honors by the Danbury Fire Department and other neighboring fire departments.  Please meet at Lee’s home, 70 Roy Ford Road, South Danbury at 12:15 PM to join in the procession to give Lee one last ride in South Danbury on a Danbury Fire Truck.