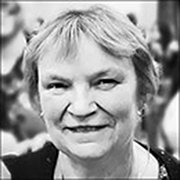 Lauraine A. (Frego) Visconti, of Westwood, Massachusetts, formerly of Massena, New York, passed away on March 14, 2020, age 66, of natural causes.

Beloved wife of Anthony T. Visconti. Loving mother of Michael A. Visconti and his wife Jenna Visconti (Flis) of Stoughton, Massachusetts, Jennifer M. Visconti and her significant other Liam Murphy of Boston, and Thomas E. Visconti and his significant other Cristina Salcedo of Los Angeles, California. Sister of the late Linda Yarger (Frego) and her husband Kent of Lincoln, Nebraska, Leo Frego and his wife Ann of Andover, New Hampshire, and Lee Frego and his wife Michelle of Hopewell Junction, New York. She is also survived by many loving nieces, nephews, and cousins.
A mother of three and nurse to thousands, Laurie was a graduate of University of Buffalo School of Nursing in 1975 and worked her entire life as a pediatric nurse at both Boston Children’s Hospital and Newton Wellesley Hospital. Laurie retired last year from her first love of nursing to her retirement dream job at the Dedham Women’s Exchange and was living it up in her second act.
She was a lifelong nurse and touched many people’s lives. Selfless and kind, she spent her life caring for others. She loved spending time with her family, hanging with the Cabin Girls, Bon Jovi, and California chardonnay. She had an energy and zest for life that could not be contained. Her smile and sass will be remembered fondly by her family and friends for years to come.
In lieu of flowers, donations may be made in Laurie’s memory to Boston Children’s Hospital or the Dedham Women’s Exchange, 445 Washington Street, Dedham MA 02026.
A memorial service will be announced at a later date.