Flangers Helped Keep Trains on the Rails in Snow

But they could damage switches and crossings 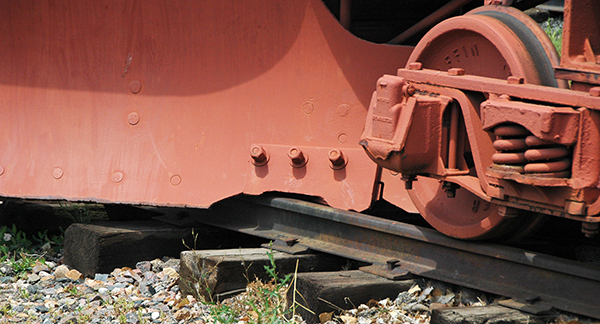 Ice and snow buildup between the rails of a railroad track can cause derailment by causing the flanges on the locomotive and railroad car wheels to ride up and over the rail. Special plow attachments, called flangers, are attached to the snow plow to clear away the ice and snow from that area.

To do their job, these flangers were lowered down between the rails. But as a result, they  would cause considerable damage to installations positioned between the rails, such as grade crossings, track switches, guard rails on bridges, etc. To avoid such damage, the flangers must be lifted before crossing these obstructions.

To instruct the engineer or snowplow operator to lift the flangers, warnings, called flanger signs, were positioned 50 feet on each side of the obstruction.

Different railroads had different designs for flanger signs. The B&M standard design was a yellow panel, 6 by 24 inches, fastened at a 45° angle to a metal post at a height of about 6 feet.  On the panel were two black circles, 4 inches in diameter.

As of 2016, the known locations of flanger signs on the Northern Rail were: