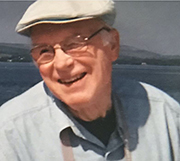 John F. Graves of East Andover died peacefully at home on November 10, 2020 with his daughter, Jill, and wife, Sandra, by his side. He was the son of John Arthur Graves and Cordelia Francis Graves.

Although he had Parkinson’s for many years, the condition did not define him. He was accepting, staying active and strong throughout and certainly maintained his sense of humor. After being hospitalized for pneumonia in May of this year, John returned home to be lovingly cared for by Sandra and Jill, aided by the support of the compassionate and remarkable services of the Franklin VNA and Hospice staff.

John was born in Weslaco, Texas in 1930 and grew up on Taunton Hill in East Andover. He attended the Andover schools and graduated from Proctor Academy in 1948.

John enlisted in the United States Marine Corps and served in Korea. After his years in service, he attended the University of Southern California, where he received a degree in Mechanical Engineering. He worked in the aerospace industry in Massachusetts (where he met and married Sandra) and Connecticut before returning to New Hampshire with his new family: John Daniel and Jill. His work encompassed research and development and product engineering for various companies throughout his career.

John served as a Selectman for the Town of Andover and was on the Cemetery Committee for many years. “A Graves on the graves committee,” he would say, with a twinkle in his eye.

In California, John helped a friend build a Tahitian Ketch sailboat. When time permitted, he enjoyed bowling and piloting a small plane. He loved to tinker and construct, to fix and invent. He designed the current house on the original (1792) Graves farm on Elbow Pond Road.

Gardening was a favourite activity, and until recently he planted a vegetable garden each year. He enjoyed challenging jig-saw puzzles, reading, cooking, pie making, and creating special cookbooks for his grandsons. Hiking and walks in the woods were other activities he enjoyed. And he loved to dance!

His grandson used the phrase “a very humble man” to describe his grandfather. John did not care to draw attention to himself, but that’s not to say that you didn’t feel his presence. His children and grandsons are fortunate to have learned his qualities of generosity, integrity, selflessness, and priority for family and place.

John is survived by Sandra, his wife of 55 years; his son, John D. Graves, daughter-in-law Mary and grandson John Michael of Florida;  his daughter, Jill Graves Power, son-in-law Paul, and grandsons David and Rory of New York; John’s brother Jim in Texas; sister Ann in Hillsborough; nieces, nephews, grand-nieces, grand-nephews, cousins and friends, all of whom shared his love of family, place, and peace.

Memorial donations may be made to the Franklin VNA and Hospice, 75 Chestnut Street, Franklin NH 03235; or to the Andover Service Club Scholarship Fund, PO Box 22, Andover NH 03216.