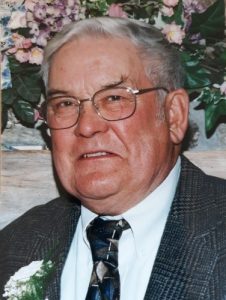 Frank Sterling Baker, Jr., 92, died on December 18, 2020 at the New London Hospital. He had been living at Woodcrest Village Assisted Living. He was the only son of Frank S. Baker of Harrisburg, New York, and Viola L. Wheeler of Marlboro, Massachusetts. He grew up in Wilmot, and graduated from Andover High School in 1947.

He is survived by a sister, Eleanor Baker Wilcox of North Fort Meyers, Florida. Frank was pre-deceased by his first wife, Madelyn Thompson Baker and leaves behind his second wife Patricia Gross (DeCato) Baker. Frank has four children, Susan G. Baker, Frank S. Baker III, and Donna Baker-Hartwell, all of East Andover, and Daryl A. Baker of Columbia, Connecticut. He also leaves behind seven grandchildren and eleven great-grandchildren.

He served in the United States Airforce from March – September of 1949, but was given a dependency discharge after the death of his father. In 1962, Frank received a B.S. in Aeronautical Engineering from Northrop Aeronautical Institute in Inglewood, California. He and the family moved back east where he took a job with Electric Boat in Groton, Connecticut. In 1968, Frank and family moved to Londonderry. They bought a summer home, a 1799 cape, on Tucker Mountain Road in East Andover.

He had a long career with Sanders Associates (Lockheed Martin) as a mechanical engineer. He retired in 1988. Frank and Madelyn moved to East Andover in 1990 and built a home on Highland Lake. Frank and Madelyn donated the Tucker Mountain Schoolhouse to the town of Andover in 2004. Over his life-time, Frank flew and restored several aircraft including Piper Cubs and Taylorcrafts.

His last airplane, a 1946 J-3 Piper, was on floats and he flew it in and out of Highland Lake. He was especially proud of the 80 or more young people that he took flying as a volunteer for the Experimental Aircraft Association’s Young Eagles Program. Their goal being to introduce as many young people as possible to flying. He restored and rebuilt many vehicles including Volvos, jeeps, and tractors. He built a small sawmill on Tucker Mountain Road in the 1980s and operated it as a hobby.

Frank and Madelyn were members of the 4,000-foot AMC and hiked all 64 summits in New England. He hiked most of the Appalachian Trail in New England. After losing Madelyn to cancer, Frank remarried in 2005 to Patricia “Tish” Gross DeCato. Pat had also lost her first husband Gordon to cancer. Frank and Pat were both former classmates of Andover High School.

Donations may be made to the Frank Baker Educational Fund c/o Woodcrest Village Assisted Living, 356 Main Street, New London, NH 03257, or Alzheimer’s Association at act.alz.org/donate. There will be no services. A private burial will be held at the Lake View Cemetery in East Andover. The Cremation Society of New Hampshire has been entrusted with arrangements. To view an online tribute, leave a message of condolence or for more information please visit csnh.com.