October 9, 2012 • Saved under Arts, Other People News
By By Charlie Darling, Beacon staff

Betsy Woodman of Andover has published the first novel in a planned trilogy, and the reading world seems to love it.

Jana Bibi’s Excellent Fortunes has garnered 4.4 stars out of a possible 5 on Amazon.com. Reader reviews call it “a charming tale with a memorable cast of characters” and “fabulous – a must-have!” Booklist, in a starred review, called it “Sweet and charming…. With its appealing and somewhat exotic setting and a colorful cast of engaging characters,… this is a stellar debut….” 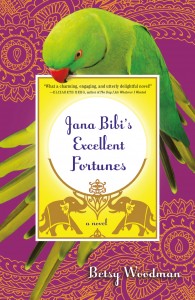 Amazon.com summarizes the story this way:

“Janet Laird’s life changed the day she inherited her grandfather’s house in a faraway Indian hill station. Ignoring her son’s arguments to come grow old in their family castle in Scotland, she moves with her chatty parrot, Mr. Ganguly, and her loyal housekeeper, Mary, to Hamara Nagar, where local merchants are philosophers, the chief of police is a tyrant, and a bagpipe-playing Gurkha keeps the wild monkeys at bay.

“Settling in, Jana Bibi (as she comes to be known) meets her colorful local neighbors – Feroze Ali Khan of Royal Tailors, who struggles with his business and family, VK Ramachandran, whose Treasure Emporium is bursting at the seams with objects of unknown provenance, and Rambir, editor of the local newspaper, who burns the midnight oil at his printing press.

“When word gets out that the town is in danger of being drowned by a government dam, Jana is enlisted to help put it on the map. Hoping to attract tourists with promises of good things to come, she stacks her deck of cards, readies her fine-feathered assistant – and Jana Bibi’s Excellent Fortunes is born.”

I spoke to Betsy the other day and found that the trilogy is keeping her plenty busy. She’s currently correcting page proofs of the second book in the Jana Bibi series, Love Potion Number 10: A Jana Bibi Adventure. Last month, Betsy spoke at the Andover Service Club meeting; next month, on Thursday, November 8, she’ll speak at Colby-Sawyer Library at 4 PM.

You can keep up with Betsy and Jana Bibi at BetsyWoodman.com or on Jana Bibi’s Facebook page. Watch for the next installment of the trilogy in May of next year.