December 2, 2021 • Saved under Committees
By Andover Planning Board

Today’s restrictive subdivision rules maximize developers’ earnings if they can subdivide a large, forested plot into uniform two-acre lots, each with at least 250’ of road frontage. The first drawing represents one such hypothetical “suburban” development. While this old restrictive “suburban” model will continue to exist in Andover, a far more aesthetic model with greater creative flexibility is possible under the proposed Conservation Subdivision.

The new ordinance provides greater financial reward to the landowner/developer in return for building a type of housing that preserves the rural character of our town and is in great demand across a wide range of age and income demographics.

The new proposed Conservation Subdivision ordinance will be presented at two public meetings in January.

The proposed ordinance has several incentives for the Town and the landowner/developer.

1) The incentives increase the number of housing units that may be built on the parcel.

2) The more compact arrangement of housing units has a low requirement for lot frontage on a Town road, saving road construction, maintenance, and snow removal costs.

3) The nearness of the housing units to protected natural areas (rather than being surrounded by suburban landscaping) makes them more desirable places to live, which will enhance their sale prices.

Notice that these gains benefit not only the developer, but also provide benefits to the Town in terms of reduced road maintenance per household, and increased tax base as new homes are built.

There are two general types of incentives in the proposed ordinance: density incentives and conservation incentives.

Conservation incentives encourage thoughtful use of energy and natural resources, aimed toward long-lived, low-maintenance, and energy-efficient structures with the lowest lifetime ownership costs. Such an incentive discourages low-quality housing that deteriorates and depreciates rapidly, but instead encourages durable housing with low long-term cost of operation and maintenance.

How much could these incentives be worth to citizens of Andover? Let’s compare a Conservation Subdivision scenario to a traditional two-acre subdivision of the same 40-acre buildable plot, as a baseline. Let’s also pretend that all the housing units have an equal average base value, just to simplify the comparisons.

Andover’s current “suburban” development ordinance would alter all the scenic and natural acreage in the tract, producing 20 homes or rental units worth, say, $200,000 apiece. Such a development would increase the Town tax base by $4 million, raise $94,000 in new revenue, but require nearly a mile of Town road to be built and maintained in perpetuity. Last year, road expenses averaged about $7,000 per mile annually in Andover, so the gross revenue increase would only be about $87,000.

An alternative scenario is illustrated in this second drawing, which shows a Conservation Subdivision of the same land. It puts 60% of the acreage in protection and allows 25 housing units, arranged according to the developer’s optimized plan housing and trails on 16 acres.

The estimated value of this larger number of comparable homes would be $5 million, to both the developer and the Town. These homes might be expected to yield about $113,000 in tax revenue, without the need for any increased taxpayer expenditure for building and maintaining new Town roads.

LEED, or “Leadership in Energy Efficiency and Design,” is the US Green Building Council’s (USGBC) well-established international design standard for construction, operation, and maintenance of buildings. The LEED benchmark standards are graded Registered, Silver, Gold and Platinum. Standards are updated periodically as new technologies emerge.

LEED homes typically use 20% to 30% less energy every year than average homes, and LEED Platinum homes may save as much as 60%. This saves those homeowners a lot of money year after year, and provides an ongoing benefit to the environment in terms of reduced pollution.

A study conducted from 2008-2016 by the University of Texas at Austin and USGBC found that LEED homes had 8% higher resale value, or about $25,000 higher than similar conventional homes valued at $200,000.

Based on this, if 25 units on the hypothetical 40-acre parcel met LEED-registered standards, those 25 units would likely be worth $225,000 apiece. Their total value to the developer and the Town tax base would be $5.6 million. Annual tax income would increase by $132,000.

Finally, if every conservation incentive were to be maximized and stacked on maximized density incentives, the total number of housing units could go as high as 30. In this case, the total value to the developer and the Town would be $6.75 million, and would place 28 of the 40 acres in permanent conservation easement. Annual Town tax revenue would increase by $159,000.

Let’s look back and compare this to the current traditional “suburban” development, which produced only $4 million of taxable property value and altered all 40 acres of natural, rural area in Andover by replacing it with two-acre tract housing.

The current total value of assessed property in Andover in 2018 was about $240 million, so a traditional “suburban” development of 40 acres would increase Town revenue by only about 1.5%, but at a cost of losing 40 acres to natural and recreational use, plus requiring an additional mile of Town road to be built and maintained.

In comparison, the maximized 30 home Conservation Subdivision development could achieve a 2.8% reduction of our current tax bills, require no new Town road building or maintenance expenses, while it also preserves 28 acres for natural and recreational use in perpetuity.

To visualize what attractive, mixed high-density housing can look like, the reader might examine Great Pines near Little Lake Sunapee on Newport Road, or River Grant across from the high school in Contoocook, both of which use much higher densities than those described here. Of course other creative designs are possible; some might be more suitable for Andover than those developments.

The proposed Conservation Subdivision ordinance does not replace the current two-acre subdivision rule; such “suburban” developments are still possible but potentially less lucrative to developers than the proposed alternative. The Planning Board of course will continue to review every subdivision proposal as it always does, to be sure that all requirements are met and that misinterpretations do not go unchecked. 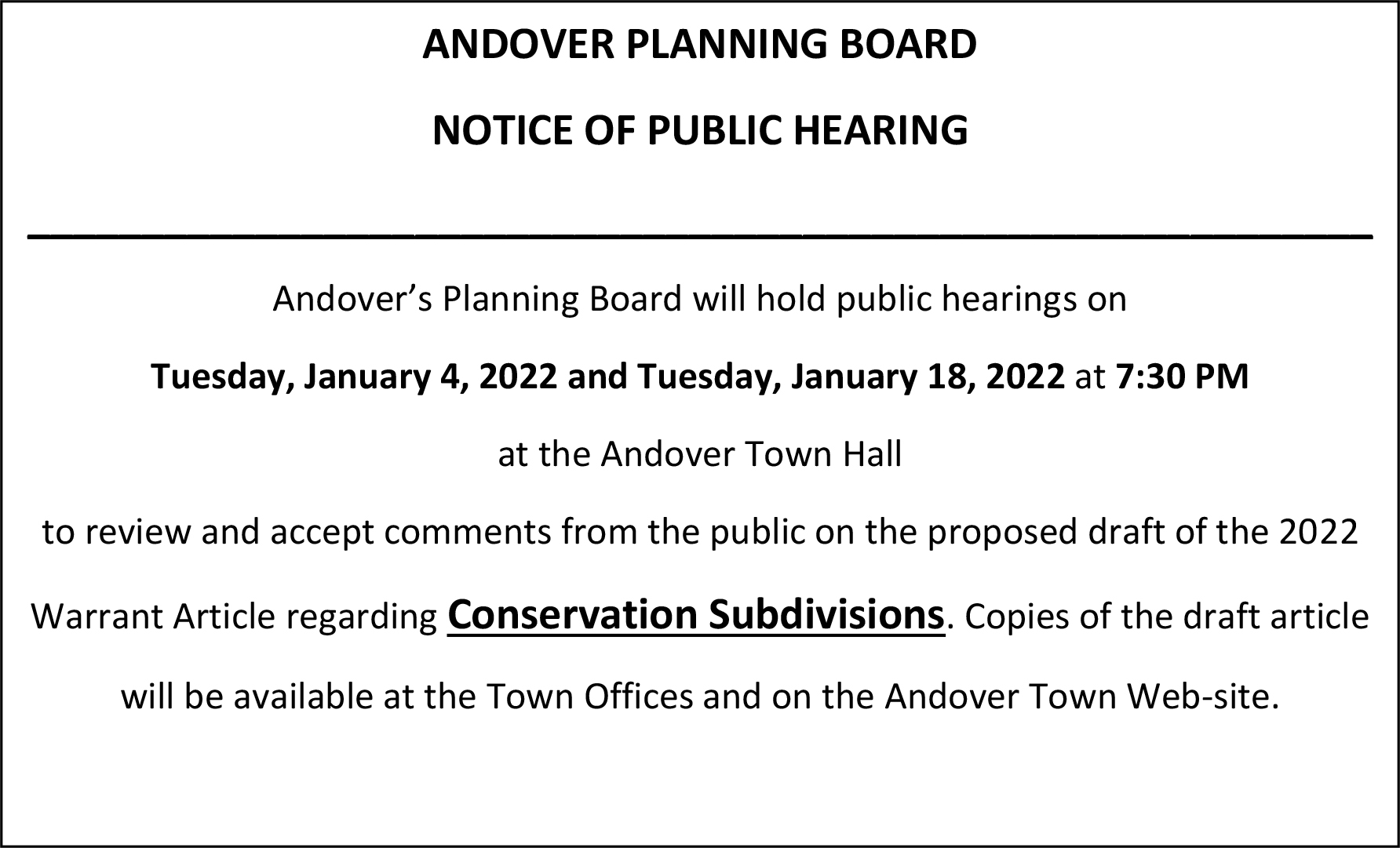 It is the Planning Board’s hope that the new Conservation Subdivision provision will preserve the appearance and character of our beloved town, while also providing positive outcomes for Andover families, landowners and taxpayers.