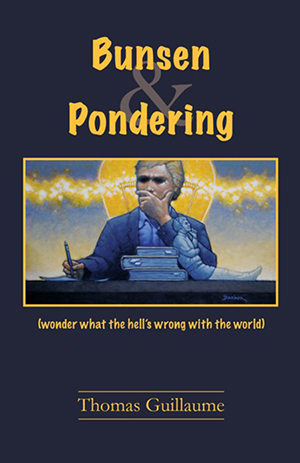 Tom Barber of Andover is a graduate of the Art Institute of Boston who went on to become an award-winning illustrator of science fiction and fantasy paperback book jackets. Tom has recently written a book under his pen name, Guillaume, called Bunsen & Pondering (wonder what the hell’s wrong with the world), which is currently not in distribution, but which you can read online at TinyURL.com/bunsen-pondering.

The story centers around a science teacher named Bunsen, who, along with his invisible side-kick “Pondering,” embark on a vacation to Switzerland in search of meaning and substance amidst an incomprehensible and chaotic world. In doing so, he engages in discourse with Jim, a hard-drinking Benedictine monk, Jason, an astronomer at a particle physics research center, Laura, an aspiring writer, and Nadir, a lone wanderer of the Swiss Alps.

Readers will find stimulation in the beliefs and dialogue of each of the characters, be it the staunch repugnance Jim holds toward organized religion, including that of his own, Bunsen’s suggestions of God being an alien visitor, Jason’s research on “active” and “latent (or potential)” energy, Laura’s enthusiasm for art, or Nadir’s thoughts on the illusion of time and the very mind of God.

A tale of speculative fiction, this book, while relatively weak in regards to character development and linguistic gymnastics, garners strength from its unwavering passion for ontological pursuit, a fire that dances with autobiographical proclivities. Barber, like his protagonist Bunsen, has come a long way in search of spirituality, mirrored in literary form by a conquest of the Swiss Matterhorn, an idealistic zeal for art, and a major run-in with alcoholism which has culminated into a hard-fought peace of mind today.

“Most of the world is being run by people in spiritual comas,” claims Barber, “Only thinking about themselves, their own greed, power trips, rather than taking care of each other.” While this is a general assumption among most apolitical, dissatisfied, or common members of society, it is his resolution on the topic that distances itself from the usual defeatist rhetoric.

“Our world, our reality, is born of the ‘plane of harmony’ where every atom knows exactly what it’s supposed to do and how to get along with all the other atoms. It’s what we do with these tiny messengers that make the difference… I’m not saying people are good or evil, some people are just lost. Harmony is where we came from, but we forget that.”

Barber never planned on writing a book. In fact, writing had never been an interest of his in general. This changed seven years ago, however, when he was hit by the proverbial “flash of inspiration,” in which he was given the title of the book, the name of the lead character, and the complete story line. The rest, he says, “was like filling in the blanks.”

Although arduous, as any writer will attest to, Barber’s writing process worked its way to paper on and off for the past several years, a development that guided itself at times. “Whenever I needed a specific person to take the next step in the production of the book, or the money needed to get it there, they always showed up, ‘right on time’.”

Only fifty copies of the book have been printed currently, something Barber likens to “throwing them to the wind” in regards to finding a publisher. As of yet, there has been no feedback of commercial interest, but he insists it’s irrelevant. “In an ideal world, this book would be free in every bookstore. All art is meant to be shared freely with the world… I believe the message is more important than money.”

To this end, his book is available online to any who wish to download it, read it, or share it at TinyURL.com/bunsen-pondering.

Above all, he doesn’t see his book as a dogmatic grand narrative, or a single text that serves to define and structure universal ethics and thought to a mass audience. “There’s nothing anyone ‘should’ be doing in this respect,” he says. “‘Should’ is a categorical imperative that produces anger and guilt. But this is a free-will universe. We’re all here to make it up as we go along and do it at our own speed. And the bottom line- simple, but not very easy at times- is to help others along the way and enjoy the ride, regardless of the hand we’re dealt.”

Despite the abstract nature of his fiction, that’s something we can all agree with.

Tom Barber currently has artwork displayed in The Center for the Arts micro gallery at Zero Celsius Wealth Studio on Main Street in New London across from the fire station. His paintings will hang at Zero Celsius through the end of July, and free copies of Bunsen and Pondering are available there while the supply lasts.

Additional paintings by Barber may also be seen at the Harbor Gallery in Sunapee through the summer. His work has been displayed in galleries from coast to coast and is in private collections worldwide.

For studio by appointment email territom@nulltds.net.