Thanks to the Fire Department

To Stephen Barton, Jake Johnson, and Carter Atwood, Thank you for a very quick response to my call for help last month at my house on Cilleyville Road. Your actions helped avert what could have been a major plumbing disaster. My gratitude goes out to the Fire Department members for doing exactly the right things, especially […]

Thanks to Andover Fire Department

We would like to thank the Andover Fire Department for assistance on the night of January 31. Responding quickly to our needs were Peter Smith, Jacob Johnson, Chief Rene Lefebvre, Ben Seaver, and Scott Davis. Most sincerely, Ed and Doreen Barkowski

The sign in front of the Town Hall was given to the Town by the Andover Lions Club for the purpose of notices concerning budget hearings, school notices, town meetings, voting, and other not-for-profit organizations’ events. The letters are printed on plastic squares which slide in between plastic grooved tracks screwed onto the background. The […]

Skating Rink on the Channel of Highland Lake

For many years I have wished that there could be an ice skating rink maintained on the channel of Highland Lake. I am wondering how to go about creating it. Are there others who would support this and who would volunteer to help? Perhaps the fire department would be willing to flood it once a week […]

Andover helps a stranger in trouble

My name is Nicholas Drew, and I am writing as a thank-you to the kind people of Andover and Franklin for the help they gave me on Wednesday, December 10. I was driving through Andover on Plains Road during the rain, snow, and sleet and lost control of my truck. Some very nice people who […]

Touching the Hearts of Veterans

The Andover Elementary/Middle School recently presented a wonderful observance of  Veterans Day. It was exciting and moving to see the students so interested in the history and struggles of our country’s wars. The students treated the program and the veterans in attendance with respect and reverence. Teachers, staff, and students did an outstanding job in […]

Every child in the country should have this experience 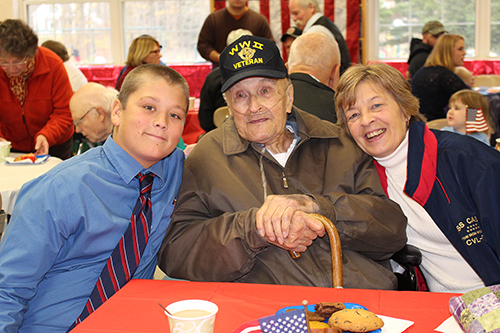 My name is Bill Converse and I am a World War II veteran. I had the honor of being invited to the Andover Elementary Middle School Veteran’s Day Celebration. It was very impressive, but I think it was more impressive for the children than it was for me. I want to thank you for the […]

Woven into the negative inflammatory critiques of the present Republican political candidates, we hear the dull drumbeat of the “do-nothing Congress.” The more one hears this type of allegation without rebuttal, the more one is likely to believe them. Are the present representatives and senators responsible for the gridlock? Bills originate in the House of […]

As the current and former Mayors of Franklin, we wish to encourage the voters of Senate District 7 to support Kathy Rago in her bid to become our next State Senator. We have observed Kathy as a member of our Zoning Board, our School Board, and ultimately as a State Representative. Rep. Rago has always […]