Did Your State Representative Really Vote on your Behalf?

While you are going to work everyday to make a living, stay retired, State Representatives Clyde Carson, David Karrick and Ken Wells (no relation) are undermining not only your taxes but your 2nd Amendment rights, and so much more. Part of the State Budget, SB1, sponsored by Democrat Senator Dan Feltes is a Mandatory Paid […]

Keeping Taxes Low is Under Attack

As we celebrate the 4th of July in the company of family and friends with a cookout or maybe go to a parade and fireworks, we should think about the meaning of the signing of the Declaration of Independence in 1776. The 13 colonies set America free by severing ties with Great Britain. These are […]

Karrick Responds to Mendola and Wells 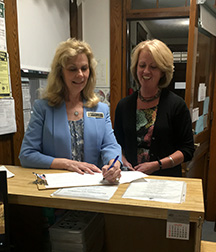 I thank everyone who gave me their vote of confidence two years ago to serve as your Representative. These two years have gone by very quickly, and I want to continue the momentum of what I said I would do for the constituents of Merrimack 25.   Therefore, I am seeking my 2nd term for […]

May 18, 2018 • Saved under Op Ed
By Natalie Wells, State Representative

As I write this, the  House Session will meet two more times before winding down for this year.  It has been a very intense year for many bills. Some were signed into law, others may get reintroduced next Session. Again I notice Mr. Karrick listing bills and how I voted. That’s fine. However, one sentence […]

Once again I’ve been tracking some of the recent votes of our current State Representatives, Anne Copp and Natalie Wells, at the Statehouse in Concord: March 22 Session: House Bill 1313, Repeals prohibitions on carrying a loaded firearm on your OHRV or Snowmobile; Wells voted in favor, Copp was absent. Bill passed 181 to 148. […]

To The Editor: Politics in this country has reached the point where I would be shocked if any candidate for the US House or Senate  showed the courage to support a national-wealth tax of 25 percent on all individuals worth $10 million or more. Here’s what we could do with that revenue: 1. Eliminate the […]

This article was updated on March 21, 2018 From Representative Natalie Wells, Merrimack 25 (Andover, Danbury, Salisbury, Warner & Webster) To Our Veterans: Are you aware that you may possibly be entitled to receive a tax credit on your property taxes? A bill passed in 2017 that allows cities and towns in NH to vote […]

Concord, NH – Today, the New Hampshire Senate supported the Ways and Means Committee recommendation of inexpedient to legislate for SB 587-L, lowering the population requirement for a city or town to collect additional fees for motor vehicle registration. After the vote, Senator Harold French (R-Franklin) issued the following statement: “We saw this same legislation […]