Christmas At The Fells Features A Winter Wonderland

On the first two Saturdays and Sundays in November, see the Main House at The Fells in a magical Winter Wonderland. Be inspired by fireside stockings and lavishly adorned trees before the hustle and bustle of the season. Each room is transformed by professional interior designers, decorators, and talented volunteers. Our Winter Wonderland will delight […] 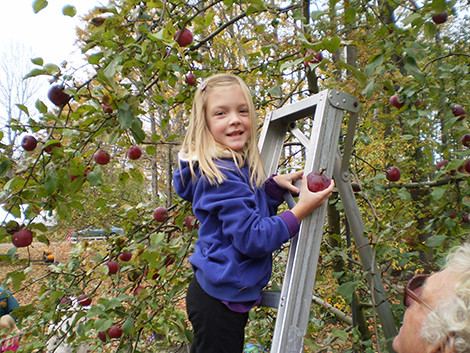 Peter Zak looks on as Norah Carlson picks an apple. The AE/MS first graders visited and picked apples at Highland Lake Apple Farm, where Peter Zak and Mary Lloyd-Evans encouraged the children to pick two bushels of apples, which they brought back to school to make apple crisp for everyone! Photo: Jennifer Bent     […]

$1 Million Investment In Snowmaking And Improvements At Ragged

Ragged Mountain Resort in Danbury recently announced over $1 million in resort improvements for the upcoming winter season. Most notably, the Exhibition trail, under New Hampshire’s only high-speed six-person lift, becomes the second top-to-bottom trail at the Resort with fully computerized automated snowmaking. Fifty of the close to 150 new low-energy, high-efficiency snow guns will […]

The New Hampshire Fish and Game Department (NHF&G) and the New Hampshire Division of Forests and Lands (NHDF&L) report that a timber sale aimed at improving wildlife habitat is slated for the Kearsarge Wildlife Management Area (WMA). The operation will occur on 157 acres of the 1,000-acre WMA and will be supervised by NHDF&L foresters. […]

Press release The Odell Park Centennial Project announces its upcoming Franklin Halloween Extravaganza. Friday and Saturday, October 26 and 27, will bring a variety of fun family events in downtown Franklin in celebration of Halloween, culminating with a haunted trail walk at Odell Park at the first-ever Odell Park After Dark event. Many Franklin area […]

WFFF Press release This year’s Warner Fall Foliage Festival (WFFF) will be held Friday through Sunday, October 5 through 7, in downtown Warner and will feature many new activities and entertainers. A children’s One Mile Fun Run will take place on Sunday at 9:30 AM, and all children are invited to participate. Also new this […]

By Larry Chase For the Beacon The loon mating season on Bradley Lake began optimistically in early June, with a pair (likely the returning pair?) building a nest on an island on the western side of the lake. Numerous observers witnessed a loon on the nest during mid- to late June, and we were all […]

Rail Trail To Be Extended, Improved In November

FNRT press release At 2 PM on Sunday, October 14, the Friends of the Northern Rail Trail in Merrimack County (FNRT) will ride for the third time to honor the memory of Peter Oren Crowell. The ride will start at Potter Place in Andover, and each rider will be free to ride as far as […]