New LEDs are brighter, cost the Town less to run

Two new LED streetlights are shining on Main Street in Andover, with more to come. The LEDs give brighter light at less cost and last significantly longer. This should be good news for drivers and pedestrians, who have been complaining for years about the quality of lighting along Main Street in front of Proctor Academy. […]

Can We Have Broadband Throughout Andover?

New Hampshire is the recipient of a three-year, $44.5 million grant funded by the American Recovery and Reinvestment Act to expand broadband Internet access throughout the state. Broadband is defined here as 768 kilobytes per second (kbps) downstream to a computer or similar device and 200 kbps upstream from a computer. Dial-up Internet access is […] 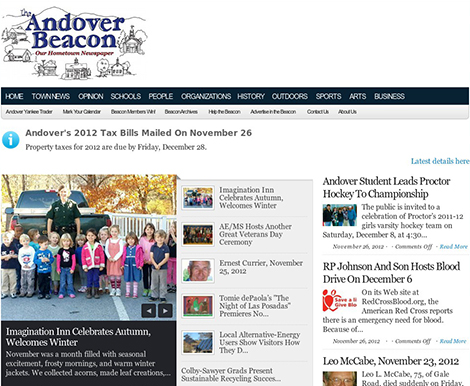 The biggest dent in the Beacon’s value to the Andover community has always been that it only appears once a month. We’ve finally solved that problem with a totally new Web site at AndoverBeacon.com. As news arrives at the Beacon’s office throughout the month, it will be posted to AndoverBeacon.com as fast as our volunteers […]

After Andover’s successful first-ever Energy Awareness Day, hosted by the Andover Energy Group on November 3, some members of the Andover community participated in a Transition Training hosted by students from Colby-Sawyer College. These students are involved in a year-long project focused on the Transition Movement. This movement seeks to improve the well-being and resilience […]

Third-year students who are Environmental Science Studies majors at Colby-Sawyer College are hosting a talk by two college graduates, Mike Mooney and John Pelech, who are owners of Poly-Recovery. This talk will be about their work with the 100-Mile Model developed by Poly-Recovery for local recycling from waste pick up to new product manufacturing. The […]

Over 81% Of Andover Voters Cast Their Ballots 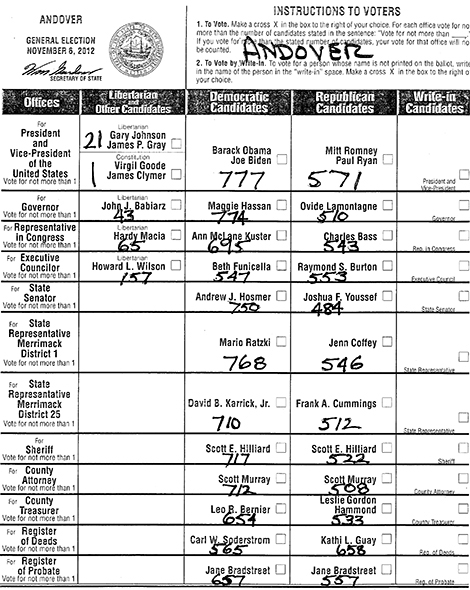 The Andover Town Clerk has posted the results of November 6th’s voting in Andover. On Election Day, 184 new voters registered at the polls, bringing the total number of registered voters in Andover to 1,689. Of those, 1,375 voted (either absentee or in person), for a turnout of over 81%. 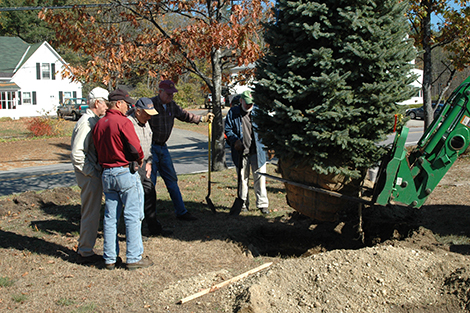 Duncan Coolidge, Garry George, Howard George, Jim Goody, and Tim Norris ponder their next move as they plant a new spruce tree in front of the Town Hall. The tree that the Andover Lions Club decorated with Christmas lights every year had gotten too tall for the purpose and was taken down earlier last month. […] 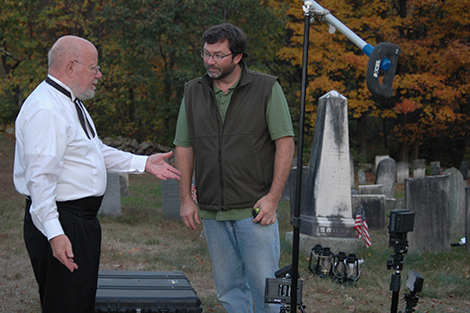 New Hampshire TV personality Fritz Wetherbee and videographer Paul Falco discuss the artistic and technical challenges of shooting a ghost segment at dusk in the Old Center Cemetery on Main Street. Andover Historical Society President Pat Cutter reminded Fritz that even though there are stories of ghosts in Old Center Cemetery, the stories aren’t true. […]

One of the ways to get a feel for how a candidate will vote is to read the party platform of the candidate’s party. Below is a taste of a relevant document from each party, plus a link to where you can read the entire document online. Platforms change over the years, so hopefully these […]