Meeting on July 25 in Danbury

The Lakes Region Broadband Stakeholder Group cordially invites you to attend a roundtable discussion that explores potential broadband improvement solutions in Danbury and surrounding towns that lack access to adequate broadband connections. You will meet technology experts and local citizens who are leading broadband initiatives in the state and in your neighborhood. You will have […]

“Slices For Scholarships” on the Village Green

Get a slice of pie and help the scholarship fund

Once again on the Fourth of July, the Andover Service Club (ASC) will be selling “Slices for Scholarships.” The ladies of ASC bake assorted pies to be sold by the slice, proceeds of which are earmarked for the ASC Merit Scholarship Fund. The ladies of ASC are known in Andover and the surrounding communities for […]

Don’t Miss the Churches’ Goodies on the Village Green

Children and their families and the thirsty will have a place to go for respite and refreshment this year during the annual Andover Fourth of July celebration. Once again from 9 AM to 2 PM the Andover Congregational Church, together with other area churches, will be hosting a couple of tents on the Village Green […]

Classic Car Show on the Fourth

The Road Relics of New Hampshire is having a Classic Car Show at the Pizza Chef parking lot on Main Street from 10 AM to 2 PM during the Andover Fourth of July celebration. Some lucky person could win a nice door prize. Take a chance on the 50/50 raffle and go home with some […]

Major Highway Work Under Way on Each Side of Andover Village

An old bridge gets new life; chance of flooding decreased. 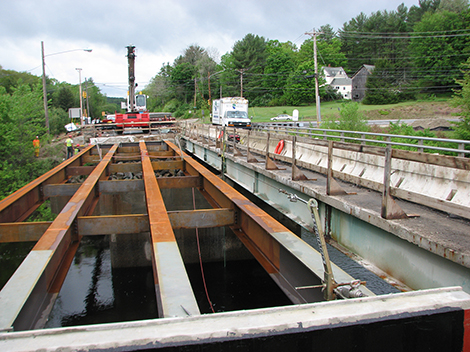 Work is progressing on schedule with the full-deck replacement of the New Hampshire Route 11 bridge over the Blackwater River in Cilleyville, near the intersection of New Hampshire Route 4A. New concrete headwalls are in place to support new steel beams for the eastbound half of the bridge. Concrete placement for the new deck is […]

Proctor has been a strong partner in major upgrades. 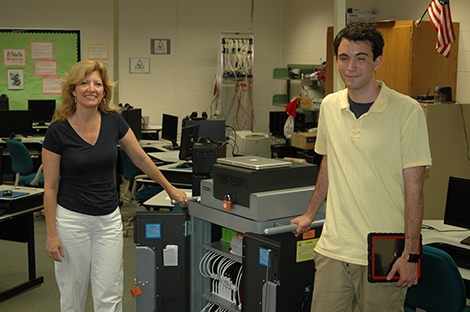 AE/MS and its technology integrator, Heidi Unger, have received generous help from Proctor Academy with AE/MS’ technology needs.  There have been volunteers that have worked at AE/MS to not only choose what kind of technology changes that the school needed to be updated, found weaknesses in the previous systems, but also helped set- up many […] 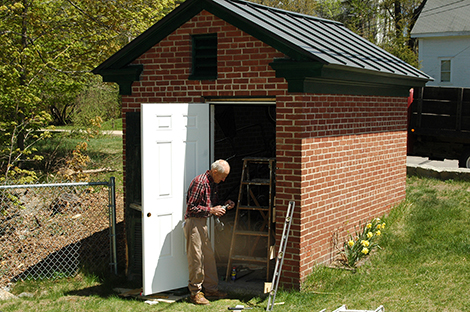 Bryant Adams has been repairing the old pumping station on Maple Street, which had fallen into disrepair over the years. According to Bryant, the small brick building hadn’t had any significant work done on it since it was built in 1942 or ’43. Mead and Braley installed a standing seam roof, but the rest – […]

Solar Power Continues to Expand in the Area

Schools, businesses, and residences are saving

The Flying Goose Brew Pub and Grille in New London serves delicious food and great brews at Crockett’s Corner in New London. Current owner Tom Mills has owned and operated the Flying Goose since 1993. In 1996 he gave what was originally called The Four Corners Grille a unique identity by creating a micro-brewery, serving delicious brews […]

No sign-ups this year – just get out there!

Here we are again! The piles of snow are melted, but what appears underneath is not a pretty sight around our beautiful town. Although we have some new beautiful sprouting grass and crocuses, there are also lots of cans, bottles, and other debris on the roadsides. It’s time to help out the roadsides and clean […]

Hosmer in Tilton on May 2

Senator Andrew Hosmer, D-Laconia, announced today he will hold a town hall meeting for District 7. Hosmer will take the opportunity to update his constituents regarding the state budget, gambling, education funding, infrastructure, and the Affordable Care Act, as well as other legislative topics they would care to discuss: What:  A Town Hall Meeting for […]