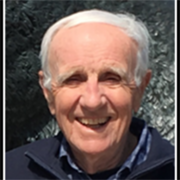 Jim was born and raised in the Concord area and graduated from St. John’s Catholic High School in 1954, followed by a 4-year career in the Navy.  Thanks to his Navy education, he found his calling, and embarked on a career in electrical engineering, ultimately spending 30 years with GTE Sylvania in Hillsborough.   After retiring in 1991, Jim followed his passions aggressively. He was an avid runner, competing in the Burlington, Vermont and Montreal marathons,as well as running in many local races.

Jim was an avid skier and was a member of the 4,000 Footers’ Club with his great friend, Jack Johns.  Throughout the year, Jim and Jack hiked the rail trails for miles throughout New Hampshire. They especially enjoyed bushwhacking, exploring cellar holes, animal dens and fishing holes.   When he wasn’t hiking, you could find Jim on the golf course. He enjoyed playing with a group of friends locally and across the US.

Throughout his life, Jim was dedicated to family.   Whether it was enjoying his eleven grandchildren at “Camp Spoil”, watching them participate in athletic, music and academic events, or just driving someone somewhere, Jim and his wife Pauline loved to be part of their lives.   Above all else, he loved being “Pop”, and was proud of all of them.

Jim is survived by his wife of 57 years, Pauline Dallaire Angwin, his four children and their spouses:  Denise Angwin and husband Ralph Mason of Chelmsford, Massachusetts, Diane Angwin and husband Paul Danahy of Chelmsford, Massachusetts, Michael Angwin and wife Rachelle Angwin of Myrtle Beach, South Carolina, and Maureen Anderson and husband Greg Anderson of Concord.  He is also survived by his grandchildren Abigail and Ellen Angwin, Isabelle, André and Claire Danahy, Mackenzie and James Angwin, and Lauren, Arthur, Jasper and Hunter Anderson; a sister, Lorraine Iacopino and her husband, Vincent Iacopino of Newbury, his longtime friend, Jack Johns of Hillsborough, and many nieces and nephews in New England and throughout the United States.

Jim was predeceased by his parents, Thomas and Leona Angwin, of Concord, and two brothers, Thomas and Albert Angwin.

There was a celebration of his life at Beaver Meadow Golf Course on November 10. Donations may be sent to the Friends of the North Country Rail Trail ( fnrt.org or FNRT-MC, PO Box 154, Andover, NH 03216).