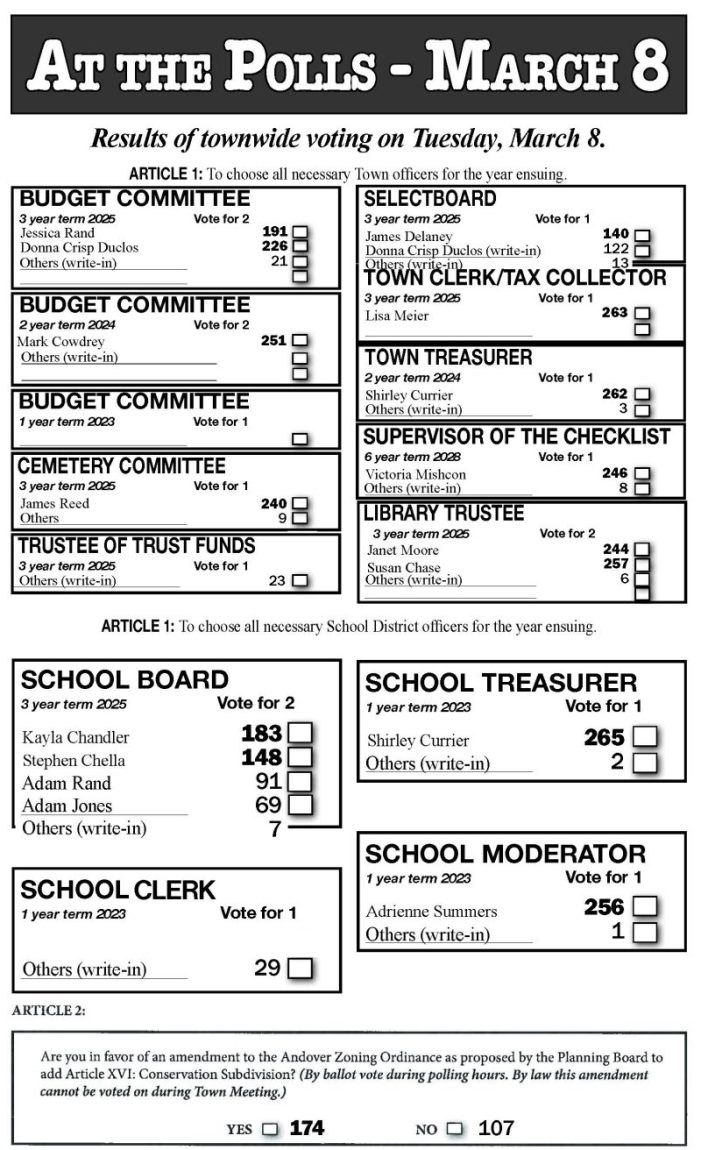 James Delaney is sworn in and "working diligently"

As a newly elected Select Board member, I think I’m fitting right in with our Select Board. We have a lot of views that are the same, and that is to do all we can for the town of Andover and do it well, managing to keep our taxes down. We are trying to make […]

Voices heard about areas of concern

The Andover Select Board and Town personnel thank everyone who came out to vote and attend Town Meeting on March 8.  This year’s Town Meeting was well attended, and discussions and questions were thoughtful, respectful, and productive.  Likewise, the annual meeting was efficient and expertly moderated.  The overall support for our town is promising and […]

Success of 2022 Town Meeting Attributed to all Players

Thank you to voters, volunteers, officials, others

Marked ballots have been securely sealed up.  Other election materials: unused ballots, check-lists, and tally sheets have also been securely stored. Newly elected officials have been sworn in, and budget numbers have been adjusted: another successful Town Election and Meeting have been wrapped up. None of this would happen without the commitment and dedication from […]

The Andover Service Club is an all-volunteer, 501(c)(3) nonprofit organization of (approximately) 50 women from Andover and neighboring communities.  Its mission is to be of service to the people of the community and the State and to broaden and strengthen the social and intellectual life of its members.  Although our general monthly meetings and usual […]

The Sunapee-Ragged-Kearsarge Greenway Coalition (SRKG) was founded in 1993. It is an all-volunteer, non-profit organization to promote hiking and land conservation. A 75-mile hiking trail forming a loop known as the SRK Greenway was built to link the most prominent peaks in the area – Mount Sunapee, Ragged Mountain, and Mount Kearsarge. The SRK Greenway […]

Formed in November of 1954, the mission of the Andover Lions Club is to provide assistance to people in need, specifically those who are visually or hearing impaired. We sponsor projects that benefit the community and improve the lives of those citizens in need in Andover, Danbury, Salisbury, and Wilmot. Eye care and hearing aids […]

Kearsarge Neighborhood Partners (KNP) is a non-profit organization dedicated to building a community where neighbors help each other flourish.  Partnering with local entities such as Warner Connects, Kearsarge Regional Ecumenical Ministries (KREM), town welfare offices, Colby-Sawyer College, food resources, the Andover Hub, and the New London Hospital, KNP seeks to address some of the root […]

Andover Town Meeting in March 2017 approved air-based heat pumps and solar panels for the Town Offices building to save energy and lower costs for the Town and improve the building’s working environment.  The heat pumps were installed in April 2017 and the solar system began generating at the end of October 2017.    The solar […]